Location: Hizen province, located on the Island of Kyushu

Hamon: flamboyant ô-gunome-midare that varies in width, mixed with tama and tobiyaki

Cutting test: Cut through two stacked bodies, the upper one at ichi no dô [#7] and the lower one at ni no dô [#9]

Certificate: NBTHK Tokubetsu Hozon (a sword Extraordinarily Worthy of Conservation by the Society for the Preservation of the Japan Art Sword)

This is a very fine katana by 1st Generation (shodai) Yukihiro, with a suriage nakago, born 1617 from Hizen province. Hizen province, located on the Island of Kyushu, was home to some of the most skilled and famous sword smiths active in the Shinto period (1596-1764). Hizen swords were highly sought after due to their supreme cutting ability, balance and durability. This is signed tachi-mei Ichi Hizen no Kuni Dewa no Kami Fujiwara Yukihiro. His first known sword was made in Kan’ei 1639 at the age of 22. He was given the title “Dewa Daijo” in 1648 then later granted the title “Dewa (no) Kami” in 1663. During the Keian 3rd (1650) he traveled to Nagasaki to study Dutch forging techniques under Yakushiji Tanenage & Hisatsugu. It is said he studied the Bizen Ichimonji techniques under Noriyoshi. *This blade bears the Ichi character, therefore it’s considered that he used Ichimonji methods in its making. Made circa 1663 – 1683. The cutting edge length (nagasa) is 71 cm / 28″.

This has a kinzogan (gold inlay) two body cutting test, cutting through two stacked bodies, the upper one at ichi no dô [#7] and the lower one at ni no dô [#9]. The test was likely done just after the 1700’s when cutting test blades became more difficult to perform. This would be considered as an anonymous cutting test, i.e. no testing date inscribed with the tester’s name and kao (seal). The number one reason for doing so is in our opinion that the bakufu had taken control of such things from the mid-Edo period, i.e. ~1700 onwards, so only shortly after Yukihiro had died. The bakufu had its Yamada Asaemon family and there were some local authorized sword testers but it had become really difficult to perform “official” tests on corpses or living criminals by that time. So its thought that there were popular channels for customers to still have their blades tested but they preferred to remain anonymous.

At the end of Yukihiro’s career, he was serving under Nabeshima Sakyo in the town of Nagase, he passed away at the age of 66 May 27th, 1683 (Tenna 3rd). His line continued into later generations as far as the 1900’s.

In his family ranks were Shodai Hizen Masahiro (his older brother by approx 11 years), his father Yoshinobu (adopted), and his grandfather Shodai Hizen Tadayoshi. Yukihiro is ranked “wazamono“ for a high degree of sharpness in his swords, Fujishiro rates him at “Jo-saku” superior made, Toko Taikan rates him a 5.5 million yen and Hawley’s rated him at 90 points. Yukihiro was known to sign his katana with tachi-mei, and his wakizashi with katana-mei (sashi-omote).

This katana is certified by the NBTHK as Tokubetsu Hozon “Extraordinarily Worthy of Preservation”.

kinzôgan: Cut through two stacked bodies, the upper one at ichi no dô and the lower one at ni no dô 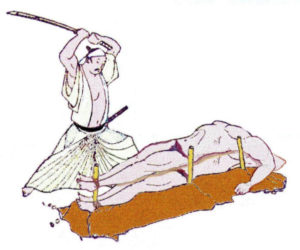